Plugin LMT, License Manager Tool, is not compatible with Piwigo 2.5 yet. That’s the bad news. The good news is that you can replace it with plugin Copyrights and plugin Perso Footer.

Plugin Copyrights lets you define licenses and apply them on photos. This plugin is much simpler than LMT because it relies on standard administration screens: Batch Manager gets new filter and new action, and you can also change the copyright on the photo edition screen. 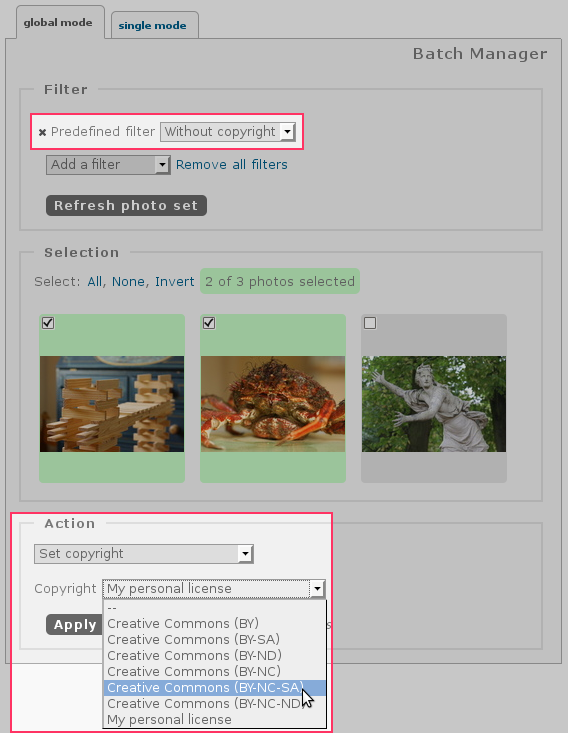 Plugin Copyrights for Piwigo let you create licenses and apply them on your photos.

Plugin Perso Footer lets you add a piece of text in your footer. Very simple.

Plugins Google+1 and TweetThis are no longer supported and are replaced by the new plugin Social Buttons. The idea is to have all your social media buttons merged into a single plugin. Social Buttons currently manages 5 social networks: Google+, Twitter, Facebook, Pinterest and Tumblr.

Plugins Google+1 and TweetThis are not available on Piwigo 2.5. For a faster upgrade of your photo gallery to Piwigo 2.5, deactivate these plugins. Let’s also say that FacebookPlug is not compatible yet with Piwigo 2.5, so if you’re only interested in the “like” button feature, replace it with Social Buttons too.